The Irish have been one of the largest contributors to American emigration in history. My ancestors came from this formidable force of people who came out of an amazing native land to our shores to find a better life. Countless Americans feel the pull to get in touch with their Irish ancestors and find out about their stories. Not everything was kept in parish records, making it hard on these shores to often find the truth of your family. There are family stories, and yes the Irish love their stories, and well, a grandiose telling is what’s needed, right? Don’t be surprised if the story you grew up on was not what really happened. Things get handed down and changed up in the telling, the story of your Great Great Gran may have had a harsh reality that was either embellished or downplayed, you never know.

Tracing your family roots can be fun, and yes when you actually get to the ancestral country, the native nod and go, “another seeker of the family soil”. That’s right, you are spotted coming in with that glazed over, “on the hunt for the ancestral home turf” look. You don’t need to start the convo you have with anyone with the, “ I researching my ancestors…”, they knew that before you walked up, saw you getting off the bus or out of the rail station. Depending on the country, and how you go about it and say it, they may embrace the fact you have come home, or not. The Irish always being a patient and loving people for the most part will be quite friendly, and if you just stand back and actually talk to people first, the easy conversation begins and is so much more enjoyable. Then you can make that connection you have been seeking for so long. 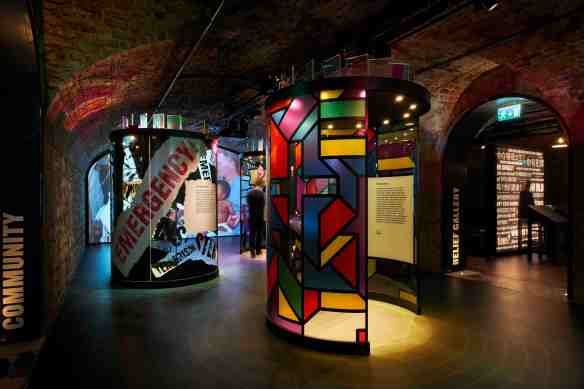 Of course if you really want to get the story of the massive immigrations over the last 150 years or so, I can think of no better place to start than EPIC The Irish Emigration Museum in Dublin, Ireland. This museum is fully immersive and interactive, filled with themed galleries on the history of immigration from Ireland. Just think, over 10 million Irish have ventured into the world to help change it. Find out how all of it started. Check out our interview below to get some insight to this marvelous venue.

Check out some of the stories of Ireland’s Immigrants

When you are done with your EPIC journey, check out these nearby attractions:

Below is an interview with Nathan Mannion, Museum Curator

How did your museum get its start, and how have you seen it grow in the last five years?

The need for an Irish diaspora museum was confirmed following a state sponsored feasibility study conducted in 2013. However state funding for the project was axed in 2015 so the resultant museum would have to be a privately funded initiative. Neville Isdell, the former CEO of Coca Cola, himself a member of the Irish diaspora then stepped in and funded the project. The result was EPIC The Irish Emigration Museum which first opened on May 7th 2016. Since the time the museum has grown steadily both in terms of profile and visitor numbers.

Has there been anything surprising that happened that you just ran with in an opportunity to create an exhibit?

Yes, while attending the launch of a temporary exhibition on the Grey Nuns of Toronto and the Famine Irish at the Canadian embassy I began discussing the poignancy of the exhibit with its curators and the connections between parts of our own exhibition. They mentioned they were looking for a venue to exhibit in next and after a discussion with the museum’s board we agreed to host it. It is due to go on display in the next two months to commemorate the 170th anniversary of 1847.

What do you consider the most challenging part of running a museum of your kind?

EPIC isn’t your typical museum. Firstly we’re based entirely underground in a nearly 200 year old historic structure which presents its own challenges. Secondly we are a state-of-the-art digital museum, which means our narrative focuses on the stories of people rather than objects. The majority of our content is interactive so our visitors experience is very different than that of a traditional museum.  Getting people to reimagine what a museum is or can be is definitely one of our greatest challenges.

What is the planning process for creating new exhibits? Do you have any behind the scenes video or articles that future visitors can look at?

The museum has a very visitor focused approach to exhibiting. Currently we’re documenting and recording stories of emigration which have been donated to us with the intention of rotating our existing exhibitions in 2018. Visitors and stakeholders have been forwarding us biographies, interview transcripts and associated documentation relating to their own, their families or famous individuals’ stories of emigration over the last 10 months and the response has been fantastic.  All of this material will be proofed, researched and verified before we can shortlist material for our future exhibits but everything is currently being archived and may find additional uses as part of our education programme, temporary or travelling exhibits or as content for our online blog.

Is there a committee that decides to feature something or a finding that becomes available and you build around that? Or does the planning involve a specific structure?

The short answer is both. The museum curatorial team usually selects the themes around which we will focus for the coming year, potentially linking them to key anniversaries or commemorations of note in keeping with the museum narrative. However you always need to remain flexible and be able to quickly respond when opportunities present themselves.

It’s the 2017 season coming and what are your plans for exhibits this coming year?

For 2017 the museum plans to exhibit a number of temporary exhibitions alongside its existing long term exhibition. The first will be the ‘Saving the Famine Irish: The Grey Nuns of Toronto’ exhibit which highlights the remarkable stories of these charitable sisters who endangered their own lives to save those fleeing the Great Famine in Ireland. Subsequently EPIC will exhibit a temporary exhibition titled ‘Migrant Memories’. It has been designed by Irish school children as part of a competition run by the museum in a four part magazine series on Irish emigration featured in the Irish Independent.

Do your exhibitions centre on the local only or do you have art and future or contemporary issues come into play occasionally?

EPIC’s exhibitions, as you might imagine, have a global focus. We chart the journey of over 10 million Irish emigrants who left our island shores and highlight the impact they and their descents have had, and are still having, overseas. Emigration is of course a highly topical subject at the moment and the museum displays often sparks lively discussions between our patrons. We feel this is an important part of our role in society and by situating and sharing individual stories within the larger narrative of Irish emigration we help to raise awareness of this often little understood aspect of Irish history and contemporary affairs.