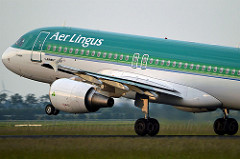 Stobart Air started out as Aer Arann, that was my flight. Ireland’s national airlines is Aer Lingus. When traveling on a super saver airline ticket, the main airline may be listed, but in truth you are traveling via another airline they partner with, thus my budget flight sold through Stobart became Aer Lingus. So, always read the small print from your itinerary as you may stand in line at the wrong check in for an hour. This was my introduction to Aer Lingus. This is the main airline that is associated with Ireland travel, and even though I was for Scotland, my stop hop was in Dublin, where I boarded one of their little match stick planes for the last hop.

The flight over the Atlantic was actually pretty good. The staff was “very welcome”, and surprisingly there was actual leg space in economy. Then there was the Irish telly programs on the in flight choices and I watched quite a bit of Irish drama. The food was fairly good light fare, and well, traveling at night and seeing a constant sun at the North Pole was something amazing. Sad thing was, I was visiting Scotland, so when I landed as entry, I barely stepped foot on the green isle.

Baggage and transfer went fairly smooth considering. Reminder US travelers, get smaller bags. Overhead baggage is getting very confined, restricted and they will snag your bag and put it in the hold. You may get that extra baggage fee in that case. I have to say the only problem I have encountered with Aer Lingus is the advertised costs of flying. If you are booking directly with them, the pricing is a bit high. If you end up on them from another partner airlines, it’s usually more reasonable. When I flew from Dublin to Glasgow on the commuter plane, I talked with a native Dub for a while and she introduced me to to better flying schemes for this next visit, how to use the smaller airlines to advantage for between the islands and to the continent. But for the larger flight across the Atlantic, Aer Lingus was a good choice, even if it was sub contracted.

Post-COVID Travel! So Ready For It.

Travel in the Time of Coronavirus-19

Traveling Scotland, with a Difference — Travels with a Kilt

The Eilean Donan Castle near Kyle of Lochalsh in Scotland — offtoafineart